Caring for all of your animals, at all times. 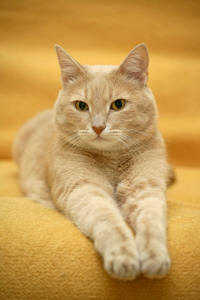 Cats have an extraordinary ability to hide signs of illness. This is because in the wild the cat can be either prey or predator and if it shows signs of weakness it may attract attention. Thus, preventive care and routine health checks are even more important in picking up early signs of disease as your cat reaches the mature life stage (7 years old and upwards).

Above 7 years of age the risk of hypertension starts to increase and early detection is vital to prevent its effects. Feline hypertension is most commonly reported as a complication of other underlying disease processes (secondary hypertension). These disease processes being chronic kidney (renal) failure and hyperthyroidism (an overactive thyroid gland). 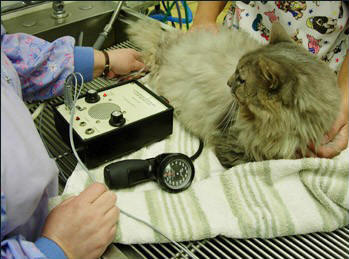 As feline hypertension can be a complication of other underlying disease processes, a variety of signs may be seen. In the case of hyperthyroidism, cats may show signs such as weight loss in spite of a ravenous appetite, hyperactivity, increased thirst (polydipsia) and urination (polyuria). Chronic kidney failure, signs such as weight loss, reduced appetite, lethargy, dehydration, mouth ulcers, vomiting, increased thirst and urination may be noticed. In many, no specific clinical signs of hypertension will be observed until the condition advances to spontaneous bleeding into the eye and/or retinal detachment causing a sudden onset of blindness. Although some cats may show a change in their behaviour and appear to be depressed and withdrawn.

To detect hypertension early, regular blood pressure (BP) monitoring in mature cats from the age of 7 onwards is recommended. A doppler flow detector with an inflatable cuff placed around one of the front legs or the tail is used to measure blood pressure which is similar in technique to that used in humans. BP measurements only take a few minutes and are extremely well tolerated by most cats.

When kidney function is no longer able to meet the body's demands this is termed Kidney failure (aka renal failure/ insufficiency).

Normal cats are born with 2 kidneys (left and right) which are located in the abdomen.

Healthy kidneys are required for many vital functions which include: 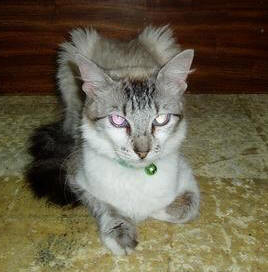 Potential causes of renal failure can be divided into 2 main categories:

The clinical manifestations of chronic renal failure vary between individual cats and are often non-specific, but commonly include:Clinical Signs

Kidney failure can be diagnosed through testing blood and urine samples, after an initial health examination. In patients with renal failure the kidneys are unable to excrete waste efficiently causing higher levels of waste products (urea and creatinine) plus altered salt levels (phosphate and potassium) with in the blood. Renal failure also affects the kidneys ability to concentrate urine. Thus, cats with renal failure have more dilute urine and increased blood levels of urea, creatinine (referred to as azotaemia), phosphate (hyperphosphataemia) and decreased blood levels of potassium (hypokalaemia).

Current treatment options involve predominantly supportive measures aimed at improving the quality of life of affected cats by employing a variety of medical treatments tailored to the individual's needs. Damaged kidneys will not recover and will get progressively worse with time, but treatment can make an enormous difference to the cat's quality and length of life. 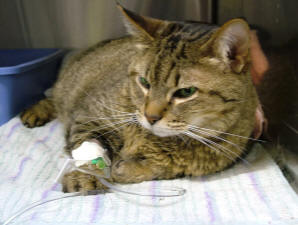 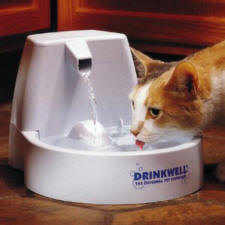 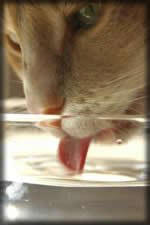 For further information on kidney failure, we recommend the book written by Dr Sarah Caney titled 'Caring for a cat with kidney failure'.

This is a common disorder seen in older cats. It is caused by an increase in the production of thyroid hormones from the thyroid glands, which are located on each side of the cat's trachea (wind wipe) in the neck. 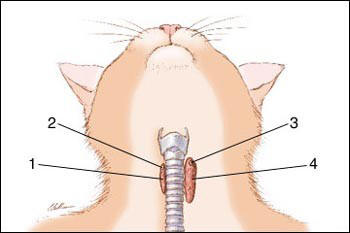 Thyroid hormones have an important role in controlling the body's metabolic rate, hence cats with hyperthyroidism tend to burn up energy too quickly and suffer from weight loss despite having a ravenous appetite with increased food intake. They also increase blood pressure, heart rate, body temperature and gut motility.

These are usually quite subtle at first, but as the disease progresses they become more severe. These commonly include;

After an initial health examination, hyperthyroidism can be diagnosed via a blood test. The blood test looks at the thyroid hormone thyroxine (T4) concentrations and other organ parameters such as liver enzymes which are commonly increased secondary to hyperthyroidism, urea and creatinine which are usually elevated in renal failure. Blood pressure should also be checked due to the potential complication of hypertension and if indicated an ECG (electrocardiogram), ultrasound or chest x-ray if secondary heart disease is suspected.